WPA on Concerns about the Homeschool Ruling in California

Summary: This email is in response to requests for information about a recent California appeals court ruling. All the major homeschooling organizations in California, including both religious and secular ones, are working together on this. They are asking California homeschoolers to remain calm, continue homeschooling as they have been, and wait for further information. WPA recommends that homeschoolers in Wisconsin support this request and not sign a petition being circulated by the Home School Legal Defense Association (HSLDA) or take other action at this time. WPA will continue to track this issue and inform you if, at any point, action by Wisconsin homeschoolers would be helpful.

Details: A lot of attention has been given to a February 28, 2008, California appeals court decision concerning a family charged in juvenile court with child abuse and neglect. The family also happened to be homeschooling. The appeals court went far beyond the charge of abuse and neglect and issued an opinion that has been interpreted by some to render any education not conducted under the authority of a certified teacher to be illegal. The opinion has been criticized by a variety of people, including Governor Arnold Schwarzenneger.

All the major statewide homeschooling organizations, both religious and secular, are asking homeschoolers to go about their business as usual, not to panic, not to contact their legislators, not to write to the California Supreme Court, and to give the organizations time.

HSLDA has gotten involved and is circulating and strongly urging people to sign a petition addressed to the California Supreme Court. WPA suggests that homeschoolers NOT sign the petition for several reasons, including the following:

- The major California homeschooling organizations, including those that are religiously based, have not called for signing the petition. In fact, there is concern about possible backlash if lots of people contact the court. WPA has consistently argued that homeschooling issues in a given state should be addressed by homeschoolers in that state and has opposed intervention by "outside experts."

- Because HSLDA is not a party to the case, it does not have the authority to submit the petition and signatures to the California Supreme Court.

(The e-mail also went on to discuss problems with virtual charter schools, which WPA strongly opposes.) I thought there were some very worthwhile points made here and thought that some of my readers would find it helpful. I particularly support the important concept of dealing with state legal issues at a state level because each state has unique legal quirks and challenges that the state organizations have become very well acquainted with.
Posted by love2learnmom at 8:20 AM

Thank you, Alicia. For some reason I never got that email, and the last time I checked the WPA website there was no posted info. Maybe I'll check it again.

You're welcome! I'm on some e-mail list that forwarded this to me. I tried to find it on their website too, but no luck.

After I posted that comment, I checked my bulk folder again and found the email from WPA. So, I did get it, after all. :-)

Thank you, Alicia. I wish that I had read this before I signed the petition which was linked in an e-mail that I received.

We're with the Pope! 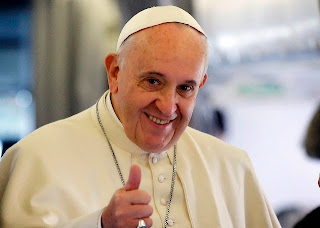 The crucifix does not signify defeat or failure. It reveals to us the love that overcomes evil and sin. -Pope Francis

Things That Caught My Eye...